(Formerly known as The Ginkgo Milk)
Backed by the fathomless talents of those who join his band and collective, Andy John Jones & The Soul Rock Club combine classic Rock, Indie, Funk and Soul sounds with Pop melody and harmony that brings forth their brand of Soul Rock. 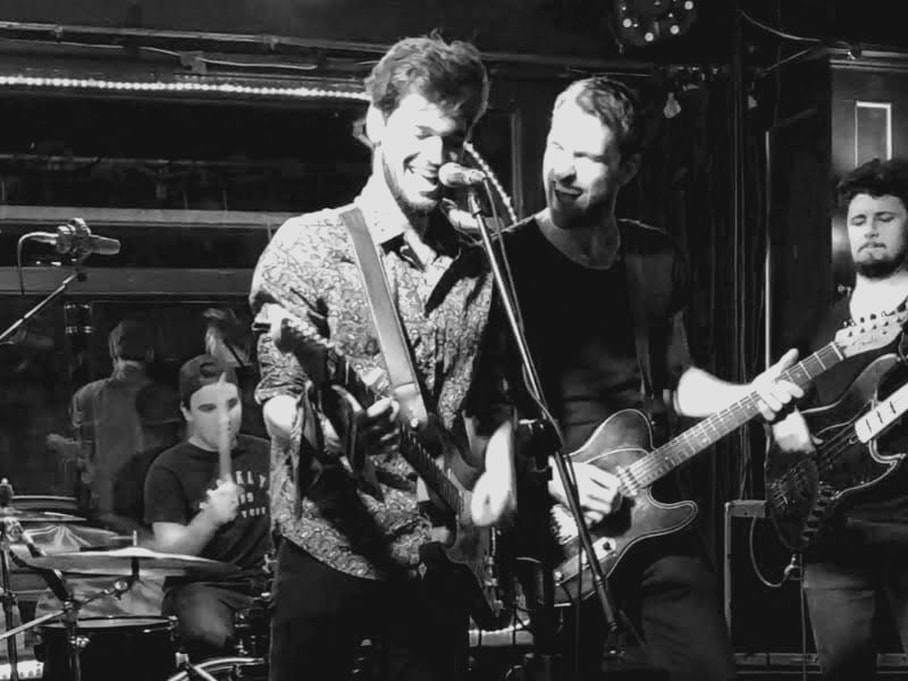 Although not a permanent member of the live line-up, Mr. Robson Janser is perhaps the most integral part of Andy John Jones and The Soul Rock Club's sound when it comes to studio productions having recorded, engineered, mixed and mastered all of Andy John Jones's studio recordings to date.

Robson is a Brazilian musician, producer, sound designer and audio engineer from Campos, Rio de Janeiro, with extensive experience performing and producing music over the last 14 years. Throughout his professional career he has worked and shared knowledge with top producers in Brazil such as Juliano Cortuah, Vini Rosa, Junior Lima and many more.

After moving to London in 2016 Robson has focused on audio post-production, including all steps from foley recording, ADR (automatic dialog replacement), sound design, soundtracking as well as mixing and mastering for various different platforms.

Strongly influenced by the 60s and 70s sound aesthetic, from Bossa Nova to Rock and Blues, Robson has a solid ground when it comes to music production having also production a number of successful collaborations. Since 2019, Robson has started his solo project (Rob J Janser), which expresses, in many ways, his production style and musical influences such as The Beatles, The Black Keys, Tame Impala, Jimi Hendrix and many more. He is currently working on on upcoming singles due for release by the end of 2020.

​It was whilst busking that Andy met Robson. In November 2016, after busking full time for 7 months, Robson came across the fresh young busker outside Embankment Tube Station on a cold wintry night. Drawn to Andy's cover of 'Snow Hey Oh' and fresh in the city of London himself, Robson took a chance and introduced himself.

The pair would not work together, however, until September that next year when Andy, a little lost and unsure about his music career, contacted the budding young producer and took him up on the offer of recording an EP.

"It was in the moment that Robson sent me that first mix that I remembered why I wanted to become a musician in the first place. And we've been working together ever since".

As well as lovingly called 'The Tone Doctor' for the sheer vastness of his musical and technical knowledge, Robson is often called the 'Partner in Rhyme' by Andy John Jones for the way in which the two gel and work together almost effortlessly within the studio. "If I don't how to word what I'm looking for technically", Andy says of the producer, "I just need to explain it in sort of layman's terms or in relation to an influence we both know of, share or that perhaps he doesn't know and he just immediately knows what I mean and how to go about achieving it. And vice versa. There have been many occasions where Robson has filled gaps in arrangements taking influence from the treasure trove that is his music knowledge".

For more about Robson check out 'Rob J. Janser' on all streaming platforms as well as search @robsonjanser on Instagram. 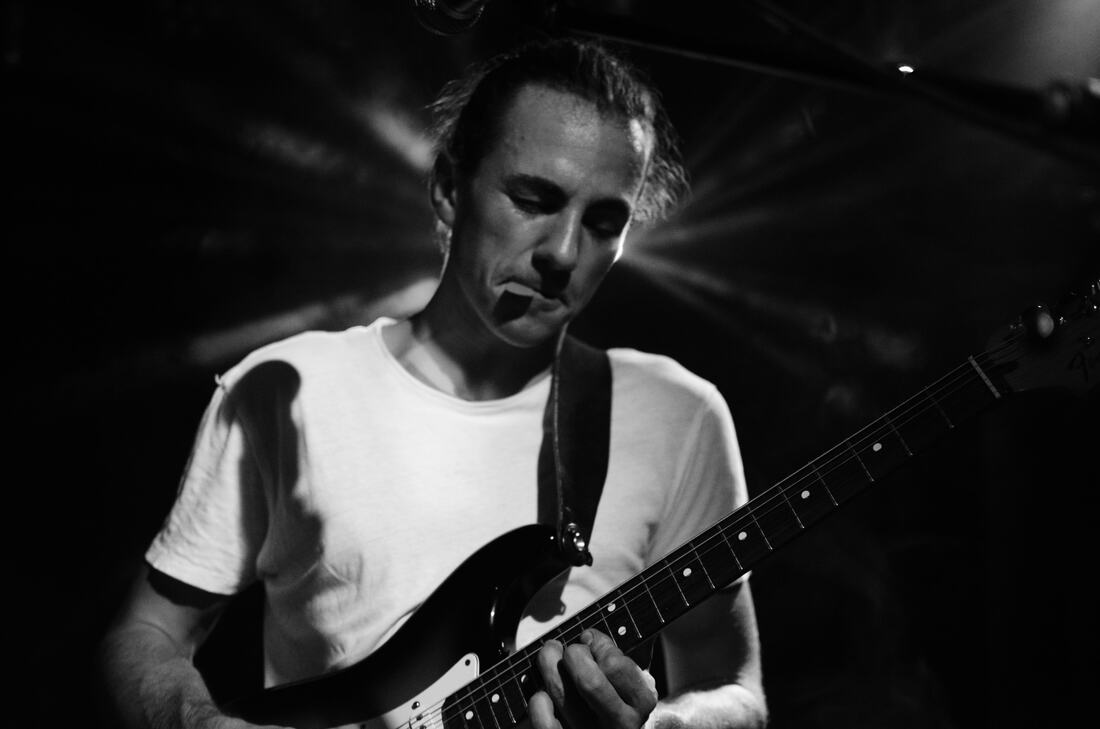 Raised in Devon UK, Jack Elliot Shelton found a keen ear for music in his early teens. An incredibly talented and unique singer songwriter unto his own right, Jack found a huge influence in the work of Red Hot Chilli Peppers guitarist John Frusciante inspiring him to delve into the multi faceted world of the guitar. Since then he has found numerous influences in the likes of Wes Montgomery, Ben Howard and Jimi Hendrix, aiding him in developing a truly unique and individual sound making Jack a distinctive force in any Blues, Folk, Jazz, Funk and/or Rock ensemble. Jack is a true servant of the music saying "the fundamentals of the music is a huge part for me...sometimes harmony leads the way, some times rhythm, sometimes melody..." By observing different takes from different people, places, genres, Jack truly understands the meaning of the word "immersion" when it comes to the world of music.

With the same musical influences, Jack and Andy work incredibly well together as a guitar wielding duo. Jack's lead guitar work is truly the icing on the cake for the Soul Rock Club's Funk, Soul and Indie Rock sound. Having met busking the streets of Westminster together, Andy and Jack began jamming original material written by Jack as well as their favourite covers. Outside tube stations and on street corners, they have developed a musical bond and understanding of one another's different playing styles spawning a close brotherhood.

​A self described "strange creature...changing from day to day, weather to weather...full of surprises" Jack is the first Ginkgo Milker and an incredible singer songwriter and artist.

You can check him out on Instagram at @jjack_elliott 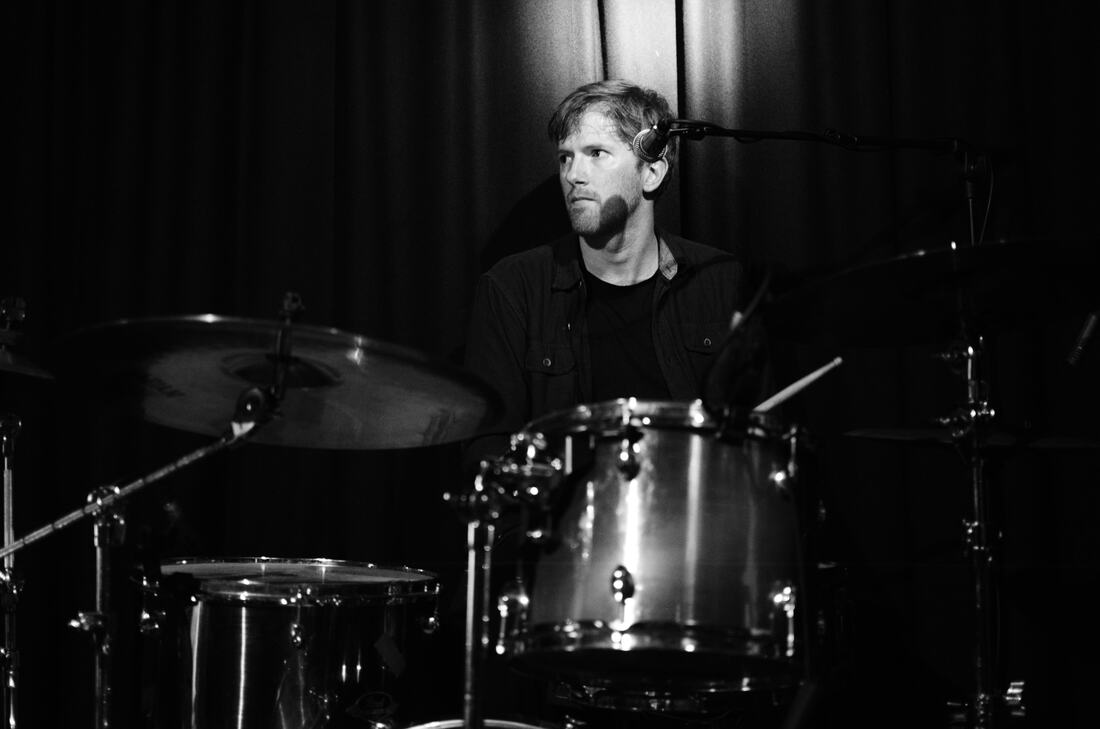 Born on the South Coast of New South Wales, Brad has been heavily into music since very early youth. Even as a toddler he’d constantly be seen in the backseat head banging to music perhaps an omen to his later passion for rhythm. Having received his first drum kit at 16 he felt as though he picked it up straight away, his only wish being that he had started sooner. He started working to pay his own weekly lessons and was obsessed spending about 9 months saving up the money to buy his first pro-level drum kit. "The day I had made enough for that final payment was one of the happiest days of my life" he said.

Dave Grohl and Taylor Hawkins were his first idols. Playing along to live Foo Fighters’ concerts in his room, their live shows had the energy that inspired young Brad to want to get out there and start gigging. Over time his influences started to change as he began listening to other styles of music. One of his biggest idols today being Benny Greb for his style, sense of groove and musicality.

After completing his Bachelors’ Degree of Music majoring in performance at the Australian Institute of Music in Sydney, Brad was grateful for having the opportunity to build upon his skills alongside amazing musicians who really pushed his abilities. "The teachers there were phenomenal as well, major props to Nic Cecire, Dave Plenty and Andy Evans!"

For his attention to detail and his insanely tight rhythm section, Brad's drumming is the foundations upon which the Soul Rock Club's sound is built. 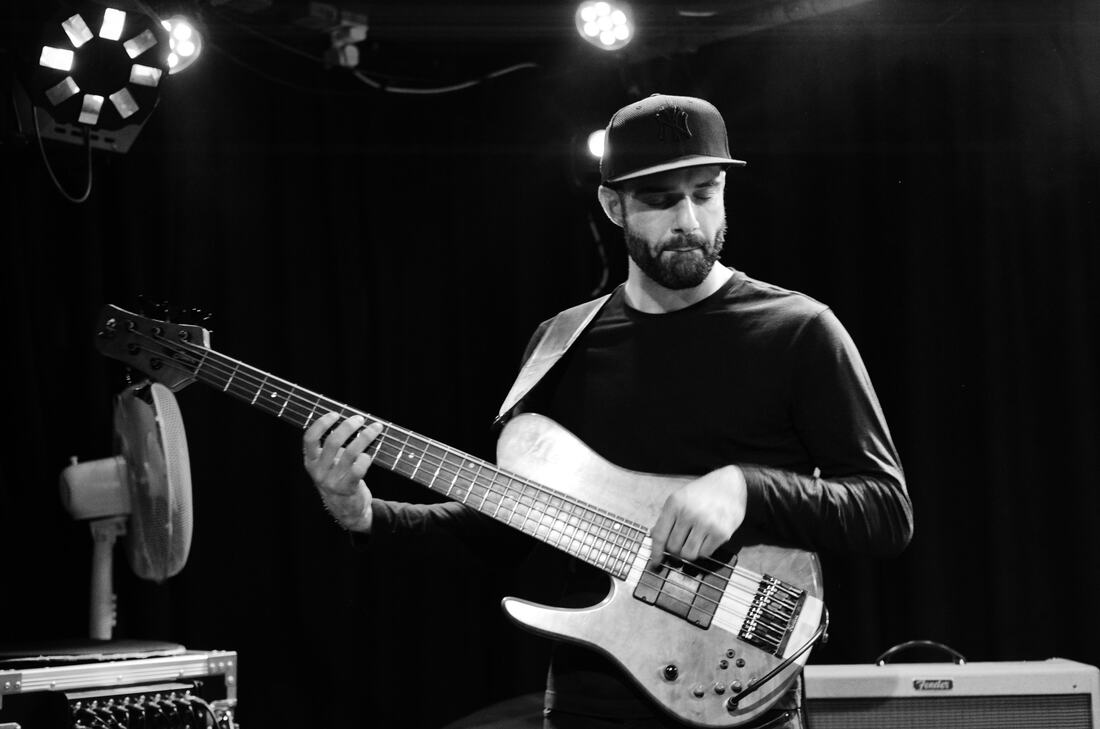 Rami is the real tour de force within the Soul Rock Club. Born and raised in Dubai,  As a young boy growing up in what was then just a desert with a few hotels, Rami Lakkis found that the music scene was limited, but his passion for the bass developed by listening to anything he could get hold of. Rami sites bassist Matthew Garrison as one of his major influences, particularly noting his melodic style and technique, but he is also influenced by others including Jaco Pastorius, Skuli Sverrisson, Gary Willis, John Patitucci, Michel Alibo, Linley Marthe and many others.

Rami began to pursue music professionally in his late teens, playing a broad spectrum of styles, from metal with Abhorred, to funk-soul with Abri, Bull Funk Zoo, and numerous Jazz, Pop, Funk and World music projects. He has performed at a number of major events including WOMAD, Dubai Jazz Festival, the F1; and opened up for artists such as Sting and many others.

In 2013 after years of experimentation he launched his self- written and produced debut album 'Origin'. The album debuted with a live performance at Matthew Garrison's acclaimed music venue Shapeshifter Lab in Brooklyn, New York, and was recorded live in Dubai at Tone Town Studios, featuring musicians Samvel Gasparyan on piano, Rony Afif on drums, Artur Grigoryan on saxophone and Jino Kim on saxophone. The album received rave reviews and firmly established Rami Lakkis as an artist in his own right.

In 2014, Rami returned to Shapeshifter Lab to record live video performance recordings of three tracks from the album with drummer Gene Lake. The videos reached out to a popular following on Youtube, and received positive appraisal. Then later, in October 2014 he was asked to accompany a short tour in India by guitarist composer Alex Machacek, as part of the Alex Machachek trio, featuring drummer Dana Hawkins. Rami has also worked with Mark Ronson and on the Jorja Smith debut album.

Since joining the Soul Rock Club, Rami's knowledge and the sheer vastness and breadth of his ability have made him not only the back bone of the Soul Rock Club sound but also perhaps its most unique and powerfully gifted member. 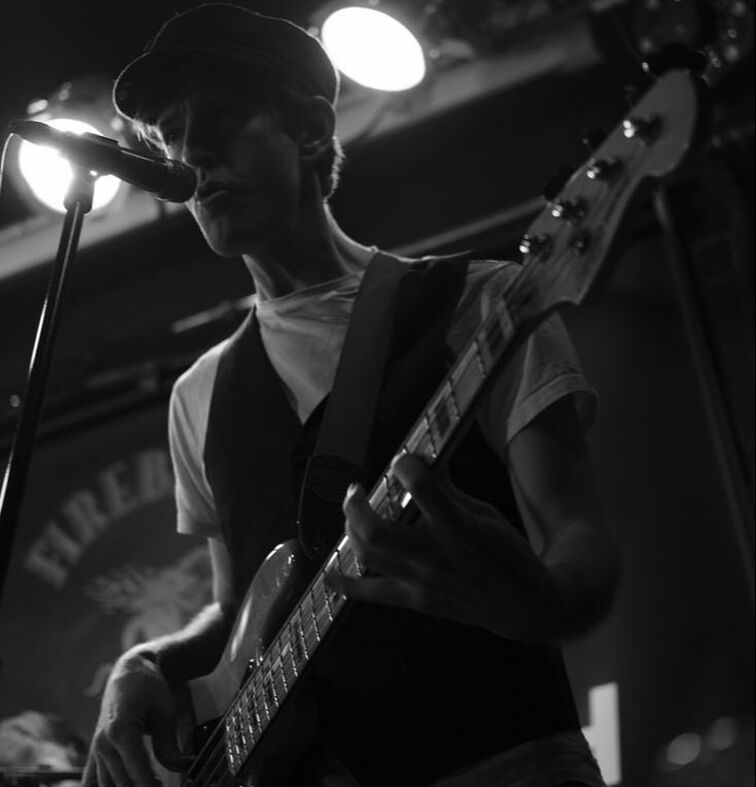 Sam was a huge guiding force in the origins of the Soul Rock Club and to Andy John Jones, contributing fantastic bass work to such songs as Old Enough For Late Nights and Tongue Tied as well as vast swathes of musical knowledge.

Another Tour de Force unto his own right, Sam spent many years as a touring musician in his home of Australia where he lived in a double-decker bus while performing four nights a week. He has performed and recorded with some of the biggest names in Australian popular music including Jim Moginie (Midnight Oil), Shane Nicholson, John Schumann (ex Redgum), Bill Chambers, and many others.

Sam Willoughby is an accomplished singer, songwriter, multi-instrumentalist and producer. His talents are enshrined in the four albums and two EPs of his own compositions he’s recorded – as well as the music he’s composed for theatre and the work he has produced for other artists.

Sam has toured Canada with the No Strings Attached theatre company, East Timor with John Schumann and the Vagabond Crew and throughout Europe as a solo act. Sam was the bassist of the award-winning alt/country band, Huckleberry Swedes and regular bassist and singer with John Schumann and The Vagabond Crew. He has also played with legendary country artist, Bill Chambers, father of Kasey Chambers.

Sam now lives in London, UK where he regularly performs, composes and produces music.
His fourth solo album, "The Record" which was recorded in London, UK by former Abbey Road Engineer/Producer, Tony Clark is available through CD Baby and most internet download sites including iTunes.

For more information head over to www.samwilloughbymusic.com