"A place where thunder strikes..."

“…stunning.” ​- Michelle Ward, Phoenix 98FM
“If you’re sick of vapid Rock and Roll melt into the ardent grooves of Andy John Jones..." ​- A&R Factory.
“…an uplifting blast of sunshine, whose soulful warmth we could all do with right now.” - Music News.
“British, soulful and sexy…” - Where The Music Meets
“...highly infectious Blues meets Funk meets Soul with Indie Rock undertones...” - The Other Side Reviews 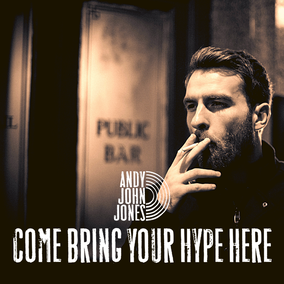 A Funk Rock Fervour
For Solidarity
By Andy John Jones

Classic funk and disco tropes mesh together within an Indie Rock frame work combining tropes from classic Funk acts like Parliament/Funkadelic and James Brown with the tone and attitude of the Arctic Monkey’s as the lyrics depict utopia in the form of a bar.


Inspired by the nightlife of Andy John Jones’s hometown/city of Tamworth and Birmingham UK, the track takes great influence from the Indie/Rock bars the singer-songwriter frequented. Specifically there still stands the Indie Rock bar Bonds in Tamworth where the singer worked and drank for many years soaking up an atmosphere that was terra formed by playlists consisting of Arctic Monkeys, The Strokes, The Libertines and many more.


“It was a filthy diamond in a filthier rough” quotes Andy John Jones, “I’ll never forget those times.” The rough and ready, brick and wood work pub is still independently owned to this day. It’s mis-matched furniture, neon lights, cheap beer and rock star portraits were a huge influence on the singer. But it was the punters who would come to inspire the song the most. “It felt like you could find anyone there. No matter your politics, no matter your background, everyone passed through Bond’s on a night out even if it was just for one. Tradesmen, artists, office workers, students, young, old, it just seemed to have this appeal to it. It was really quite unique.”


Lines like “you’ve got your shadow, they’ve got their shade” and “you got your poison, they’ve got their high grade” depict a place where all are welcome with differences left at the door. There’s a seedy but electrifying & mythical quality to the place where “thunder strikes, same place same day” and the “belly dancers”, “the freak show” have the answers to “what you don’t know” implying a questioning of dogmatic wisdom in favour of open minded empathy. All this put to a mix of riff & wah pedal driven rhythm guitars from Andy John Jones, classic Indie lead playing from Jack Elliott, relentless grooves from bassist Rami Lakkis channeling Bootsy Collins and Jaco Pastorius and a combination of Michael Barker’s groove with Chad Smith’s power house drumming from Brad King. Add backing vocals reminiscent of a rowdy football stadium and the result? The brand new Funk de force from Andy John Jones and his band The Ginkgo Milk.


Political developments were also hugely influential. Written in 2017, a period of great political tension, Jones was very active as a busker in London where there were political demonstrations almost every weekend. In an age of fake news and contention with traditional experts the singer bore witness to many headline making protests. “A lot of the time you’d meet people who really knew their stuff” writes the singer, “but you’d also get this group who were just joining ‘the hype’. So many of the issues over the past few years have been so emotionally charged”. The singer continues; “But it was also great to see some solidarity when two opposing opinions were given the opportunity to just talk in person like human beings. Ultimately everyone’s after the same thing; security, liberty, cooperation and a good time. There are exceptions but I think social media and mainstream news have a lot to answer for. They’ve done a very good job of convincing people that there are huge divides in society to the point where people are having less and less time for personable discourse and more time for ignorance and at worst physical violence. Taking heed of a Bill Hicks skit and a Frank Zappa quote, I can remember feeling like the very British idea of ‘settling something over a pint’ was needed more than ever.”

So for dive bar gigs, cheap beers & neon lights this love letter is a celebration of that Friday night feeling and the good times we can have when we come together. So raise a glass and celebrate the laughs, the love and the good life! May they return in style.

Andy John Jones oozes soul with his Blues/Funk infused Soul Rock which has seen him winning the hearts of strangers as a busker on the streets of London. Learning his songwriting craft from working in McDonald’s, local pubs and as a labourer for local tradesmen, by night Andy John Jones would hone his live skills in the open mics of local boozers around his home city of Birmingham, UK.

His sound would evolve after moving to London where, come sun or come snow, Andy spent twelve hour days busking the streets of Westminster building a growing and enthusiastic fanbase. In December 2019, this fanbase crowdfunded the recording of his debut album A Night On The Boomtown, a Soul Rock study of a Friday night recorded with his band The Ginkgo Milk, due for release on streaming platforms in Summer of 2021. The thunderous three and a half octaves of his vocal range have brought him comparisons to singers-songwriters like Bruce Springsteen, Paolo Nutini and Jeff Buckley, and his guitar work has had him compared to John Mayer and John Frusciante.
(Click PDF for full length bio)

andy@andyjohnjones.com
Thank you for your time. AJJ x